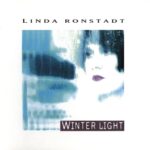 Winter Light is an album by American singer Linda Ronstadt, released in late 1993.

Winter Light was Ronstadt’s first solo album since Don’t Cry Now not to be produced by Peter Asher; she elected to produce it herself, along with George Massenburg. The album marked Ronstadt’s increased responsibilities and confidence behind the boards, this time achieving a multi-layered Enya-styled New Age-oriented sound, as in Anna McGarrigle’s “Heartbeats Accelerating” — the album’s first hit single — and Brian Wilson’s “Don’t Talk (Put Your Head on my Shoulder)”. “Heartbeats Accelerating” featured a popular music video while another track, a remake of the classic 1960s R&B hit, “Oh No Not My Baby”, was a Top 30 Adult Contemporary hit for Linda in the spring of 1994.

Other aspects of the album show Ronstadt paying tribute to great female vocalists of the 1960s, with a combination of rock n roll, oldies, and rock ballads. Three of the songs – “Anyone Who Had A Heart”, “Oh No Not My Baby”, and “I Just Don’t Know What to Do with Myself” – had been previously recorded by Dusty Springfield. Ronstadt selected classic compositions from various songwriters such as Burt Bacharach, Carole King, and Jimmy Webb, as well as from contemporary ones such as Tish Hinojosa. The album also showcased Ronstadt the singer-songwriter and music arranger, introducing her own composition, “Winter Light,” which was notably covered by Sarah Brightman on her 2001 album, Classics and Chloë Agnew for her Walking In The Air album.

The title track was also prominently used in the 1993 film The Secret Garden, but was not featured on the film’s original soundtrack release.

2 Do What You Gotta Do

3 Anyone Who Had A Heart

4 Don’t Talk (Put Your Head On My Shoulder)

7 I Just Don’t Know What To Do With Myself

8 A River For Him