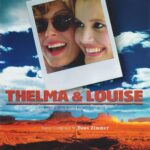 Thelma & Louise is a 1991 American female buddy road crime film directed by Ridley Scott and written by Callie Khouri. It stars Geena Davis as Thelma and Susan Sarandon as Louise, two friends who embark on a road trip that ends up in unforeseen circumstances. Filming took place from June to August 1990. The supporting cast include Harvey Keitel, Michael Madsen, Christopher McDonald, and Brad Pitt in one of his first major film roles.

The soundtrack was composed by Hans Zimmer and was re-released in 2011.