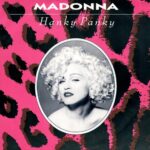 “Hanky Panky” is a song by American recording artist Madonna from her soundtrack album I’m Breathless. It was released on June 12, 1990, by Sire Records as the album’s second and final single. Written and produced by Madonna and Patrick Leonard, the song was developed from a line in the parent film, Dick Tracy, talking about a woman who enjoys being spanked by her partner. Performed in an almost comical style, “Hanky Panky” is a jazz and swing song with a changing bassline and minor to major key-shift in the chorus. It caused some controversy in Ireland because of its innuendo and racy lyrics, with women’s groups deeming them as harmful; Madonna later clarified that the lyrics were intended as a joke.

I’m Breathless: Music from and Inspired by the Film Dick Tracy is the second soundtrack album by American singer and songwriter Madonna. It was released on May 22, 1990, by Sire Records to promote and accompany the film Dick Tracy. In the film Madonna starred as Breathless Mahoney and her then-boyfriend Warren Beatty played the […]