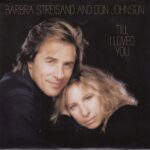 “Till I Loved You” is a song from the never-staged musical Goya: A Life in Song, based on the life of the Spanish artist Francisco Goya. It was written by American composer Maury Yeston. The original was sung by tenor Plácido Domingo and American singer Dionne Warwick. It was subsequently released as a single by Domingo with another collaborator to the album, Jennifer Rush. The song reached #24 on the UK Charts in 1989, and was featured on the concept album of the musical.
It was covered (although released first) as a duet by Barbra Streisand and Don Johnson, and appeared on Streisand’s Platinum-selling 1988 album of the same name, and later on her 2002 compilation, Duets. As a single, it reached #16 in the United Kingdom, #25 in the United States and #22 in the Spain Top 40 Radio. It also reached #3 on Billboard’s Adult Contemporary survey.

Till I Loved You is the twenty-ninth studio album by American artist Barbra Streisand, released on October 25, 1988 on Columbia Records. The album was particularly notable both for its thematic structure (its eleven songs chronicle a romance’s beginning, middle and end) and its high-budget production, as many guest writers, producers and musicians participated during […]