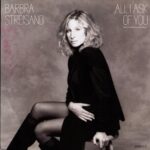 “All I Ask Of You” is a song from the 1986 English musical The Phantom of the Opera, between characters Christine Daaé and Raoul, originally played on stage by Sarah Brightman and Steve Barton, respectively. It was written by Andrew Lloyd Webber, Charles Hart and Richard Stilgoe, and solely produced by Lloyd Webber.

American singer Barbra Streisand recorded a cover of “All I Ask Of You” for her 29th studio album, Till I Loved You (1988). It was released as the album’s second single on 15 December 1988 by Columbia Records. Till I Loved You is a concept album chronicling the different stages during a romantic relationship, where the beginning songs detail the good times and the final tracks discuss a painful breakup; accordingly, “All I Ask of You” was placed as the record’s sixth track. It was produced by frequent Streisand collaborator Phil Ramone.

Till I Loved You is the twenty-ninth studio album by American artist Barbra Streisand, released on October 25, 1988 on Columbia Records. The album was particularly notable both for its thematic structure (its eleven songs chronicle a romance’s beginning, middle and end) and its high-budget production, as many guest writers, producers and musicians participated during […]