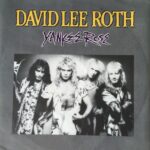 Yankee Rose” is a song recorded by David Lee Roth, featuring the prominent electric guitar of its co-writer, virtuoso Steve Vai. Roth’s first single on his 1986 first full-length solo LP Eat ‘Em and Smile, with lyrical allusions to the American National Anthem and Irving Berlin’s God Bless America, as well as July 4th, independence, flag unfurling, rocket flare, fire crackers, apple pie, and her torch light, it was recorded as a tribute to the Statue of Liberty, as the statue was completing a major renovation for the 100th anniversary of its dedication in 1886: