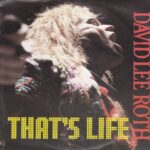 “That’s Life” is a popular song written by Dean Kay and Kelly Gordon and first recorded in 1963 by Marion Montgomery. The song was covered in 1986 by David Lee Roth for his album Eat ‘Em And Smile. It peaked at #85 in the US Billboard Charts.