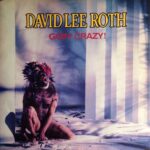 “Goin’ Crazy!” is the second single by David Lee Roth taken from his album Eat ‘Em And Smile (1986) and reached #66 in the US Billboard Charts.