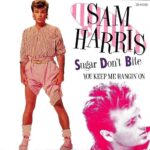 “Sugar Don’t Bite” is the first single by Sam Harris, from his self titled album. It was released in 1984 and reached #36 in the US Billboard Charts.

Sam Harris is the self titled debut album by Sam Harris, released in 1984 on Motown. Samuel Kent Harris (born June 4, 1961) is an American pop and theater musician as well as a television, theater and film actor. Tracks 1  Out Of Control (Skip Adams; Lenny Macaluso) 03:41 2  Sugar Don’t Bite (Bruce Roberts; […]