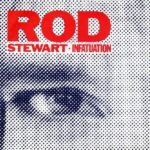 “Infatuation” is a 1984 hit song by Rod Stewart. It was written by Stewart, and features guitar playing by Jeff Beck, who makes a cameo in the video. When released as a single, it had two different B-sides. The first B-side was “She Won’t Dance With Me”, which is from his 1980 album Foolish Behaviour while the second B-side, “Three Time Loser”, is from his 1975 album Atlantic Crossing.