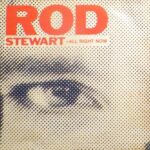 “All Right Now” is a song by the English rock band Free. It originally appeared on the 1970 album Fire and Water, which Free recorded on the Island Records label, formed by Chris Blackwell. Rod Stewart recorded the song and released it as a single in the U.S., reaching number 72 in the winter of 1985.