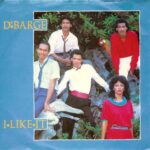 “I Like It” is a 1982 R&B/Soul song by American family band DeBarge. Released on August 20, 1982 by Motown Records (Gordy), It was the second single from their second studio album, All This Love.

After releasing their poorly-received self-titled album, the group quickly returned to the studio to record their second album. Choosing to add younger brother James and shortening their name to simply DeBarge, the group returned to Motown’s recording studios determined to produce a hit.

The song was musically composed by El DeBarge, who also produced the track with Iris Gordy, with lyrics provided by Randy, El and sister Bunny, who composed the much-copied bridge. While being interviewed for the TV documentary, Unsung, in 2008, co-producer Iris Gordy told El to sing the final ad-libs “I like it, I like it”, in a higher register. El responded by telling Iris that she was “trying to make sound like (his brother) Bobby”, to which Iris returned with, “you better thank your lucky stars if you sound even close to Bobby”.

According to Randy, who was also interviewed for the show, while he wrote lyrics to and sang lead on the song’s verses, while Bunny wrote the bridge, which El sung, while Bunny said El “was the producer, he brought it all home”. El composed the musical track. It also featured a sing-along type unified harmony which was arranged by El.