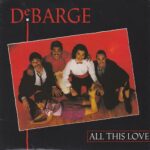 “All This Love” is a single by DeBarge, released on October 17, 1982. The song was released as the third and final single from their second studio album of the same title on the Gordy label. The single would help DeBarge rise to R&B stardom. A cover version of the song was recorded by Patti LaBelle on her 1994 gold album Gems. A video for her version was also filmed.