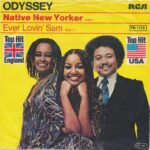 “Native New Yorker” is a disco song written by Sandy Linzer and Denny Randell. It was first recorded in 1977 by Frankie Valli and released on his album Lady Put the Light Out. Later in 1977 the song became a hit single for the soul dance band Odyssey, reaching No. 3 on the U.S. disco chart. Odyssey‘s “Native New Yorker” also went to No. 6 on the soul chart and No. 21 on the Billboard Hot 100. It reached No. 5 on the UK Singles Chart.

The group recorded the song at House of Music, a private recording studio on Pleasant Valley Way in West Orange, New Jersey. Jeffrey Kawalek was the recording and mix engineer. Richard Tee played its signature piano track. Jim Bonnefond assisted on many sessions. Studio owner Charlie Conrad did additional engineering, and added additional instrumental solos to the original mixes to create extended dance versions. Sandy Linzer added Tommy Mandel on clavinet and played hair drum himself on the mix that would be released as a single, engineered by Billy Radice at Olmstead studios in New York City.

It was later sampled by Rich Cronin’s band, Loose Cannons, for their song “New York City Girls,” as well as by the house music group, Kluster, in their song featuring Ron Carroll, entitled “My Love”.

The tenor saxophone solo on Odyssey’s recording is played by Michael Brecker.George Young was part of the horn section, where he played alto sax.

Odyssey is the first album by Odyssey, released in 1977 on RCA Victor. Odyssey is originally a New York City, United States-based singing group, best known for their 1977 hit “Native New Yorker”, and a series of other mainly dance and soul hits in the late 1970s and early 1980s. Now based in the United […]