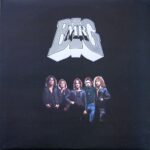 Mr Big is the third album by the British band Mr Big (not to be confused with the American rock band). It was released in 1977 on EMI.

The band toured in 1977 in the United States in February, March and April with Tom Petty, Journey, Kansas and The Runaways. Meanwhile, the single “Romeo” reached No. 4 in the UK Singles Chart, despite a temporary ban by the BBC. It also peaked at number 44 in Australia. It also sold well in Japan, the U.S. and parts of Europe, and was covered in 1977 by the South African band ‘Pendulum’. The follow-up single “Feel Like Calling Home” failed to capitalise on the success of the previous one, and only reached No. 35 in UK. The band embarked on a UK headline tour with more television appearances in the UK and Europe.