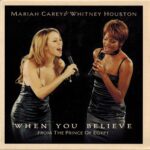 “When You Believe” is a song from the 1998 DreamWorks musical animated feature The Prince of Egypt. It was written and composed by Stephen Schwartz. A pop single version of “When You Believe”, with additional music and lyrics by writer-producer Kenneth Edmonds, was also recorded for the film by American singers Whitney Houston and Mariah Carey for the film’s end credits and its soundtrack album. Additionally, the song serves as the lead single for both Houston’s fourth studio album, My Love Is Your Love and Carey’s first compilation album, #1’s. The original version of the song, featured in the narrative portion of the film, is performed by Sally Dworsky, Michelle Pfeiffer, and a children’s choir (children’s choir soloist: Andrew Bryan). “When You Believe” is described as a big ballad, with meaningful and inspirational lyrics, describing the ability each person has to achieve miracles when they reach out to God and believe.