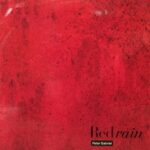 “Red Rain” is the first track on English rock musician Peter Gabriel‘s 1986 solo album So. In the USA, it was the second single from the album and reached number three on Billboard magazine’s Mainstream Rock chart in 1986, where it stayed for three weeks between July and August. In the rest of the world it was not released until 1987 and received less airplay and fewer sales, peaking at 46 in the UK singles chart after entering the chart in July of that year. A live version also charted in the US and the UK in 1994.