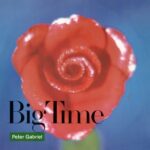 “Big Time” is a song by English rock musician Peter Gabriel from his 1986 album So. It was his second top-ten single on the Billboard Hot 100, peaking at no. 8.

The song’s bass guitar part is unique in that backing bassist Tony Levin and then-backing drummer Jerry Marotta teamed up for the main bassline. Using one of Levin’s fretless basses, Levin handled the fingerings while Marotta hit his drumsticks on the strings, which is why the bass part sounds percussive. Inspired by this sound, Levin later invented funk fingers, which were little drumstick ends that could be attached to the fingers to achieve a similar bass guitar effect in concert. Police drummer Stewart Copeland plays drums on the song, and P. P. Arnold, Coral “Chyna Whyne” Gordon, and Dee Lewis, all of whom also sang on “Sledgehammer”, performed backing vocals.