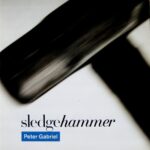 “Sledgehammer” is a song by English rock musician Peter Gabriel. It was released as the lead single from his fifth studio album, So, on 21 April 1986. It was produced by Gabriel and Daniel Lanois. It reached No. 1 in Canada on 21 July 1986, where it spent four weeks; No. 1 on the Billboard Hot 100 chart in the United States on 26 July 1986; and No. 4 on the UK Singles Chart, thanks in part to its music video. It was his biggest hit in North America and ties with “Games Without Frontiers” as his biggest hit in the United Kingdom.

The song’s music video won a record nine MTV Video Music Awards at the 1987 MTV Video Music Awards and Best British Video at the 1987 Brit Awards. The song also saw Gabriel nominated for three Grammy Award for Best Male Rock Vocal Performance, Record of the Year and Song of the Year. In a 2005 poll conducted by Channel 4 the music video was ranked second on their list of the 100 Greatest Pop Videos