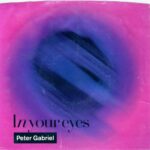 “In Your Eyes” is a song by English rock musician Peter Gabriel from his fifth solo album So (1986). It features Youssou N’Dour singing a part at the end of the song translated into his native Wolof. Gabriel’s lyrics were inspired by an African tradition of ambiguity in song between romantic love and love of God.

“In Your Eyes” was not released as a single in the UK but was pulled as the second single from So in the US, achieving strong radio airplay and regular MTV rotation. It reached No. 1 on the U.S. Billboard Mainstream Rock Tracks on 13 September 1986, and peaked at No. 26 on the Billboard Hot 100 in November. Gabriel released two extended versions of the song as a 12″ vinyl single in the US. The first (the Single Mix) ran 6:15. The second (the Special Mix) ran 7:14. In Australia, “In Your Eyes” peaked at No. 97 in November 1986