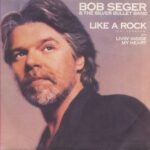 “Like A Rock” is a song written by American singer-songwriter Bob Seger. The single peaked at No. 1 on the US Billboard Mainstream Rock Tracks.

Seger told the New York Times that the song “was inspired partly by the end of a relationship that had lasted for 11 years. You wonder where all that time went. But beyond that, it expresses my feeling that the best years of your life are in your late teens when you have no special commitments and no career. It’s your last blast of fun before heading into the cruel world.”

Like a Rock is the thirteenth studio album by American singer-songwriter Bob Seger, released in 1986. The title track is best known for being featured on Chevrolet truck commercials. “Fortunate Son” is a live cover of the 1969 Creedence Clearwater Revival hit, recorded March 31, 1983 at Cobo Hall in Detroit. It was originally available […]