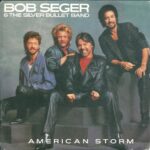 “American Storm” is a song written by American singer-songwriter Bob Seger. It was recorded with The Silver Bullet Band and released in March 1986 as the lead single from their album Like a Rock. The single peaked at number 13 on the U.S. Billboard Hot 100 chart and at number 2 on the US Billboard Mainstream Rock Tracks chart.

Like a Rock is the thirteenth studio album by American singer-songwriter Bob Seger, released in 1986. The title track is best known for being featured on Chevrolet truck commercials. “Fortunate Son” is a live cover of the 1969 Creedence Clearwater Revival hit, recorded March 31, 1983 at Cobo Hall in Detroit. It was originally available […]