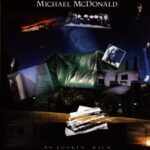 No Lookin’ Back is the second solo studio album by American musician Michael McDonald. It was originally released in July 1985, on the label Warner Bros. Records, three years after his debut album, If That’s What It Takes; this was his last album to be released by Warner Bros.  For the first time, he co-produced and wrote or co-wrote all of the tracks. It features contributions from guitarists Joe Walsh (Eagles, James Gang), Robben Ford and David Pack from Ambrosia, Jeff Porcaro on drums (Toto, Steely Dan), plus the former Doobie Brothers member Willie Weeks on bass, and Cornelius Bumpus providing horns.

On release, the album was received favorably by the majority of music critics and peaked at No. 45 on the US Billboard 200. Three singles were issued from No Lookin’ Back: “No Lookin’ Back”, “Bad Times” and “Lost in the Parade”. The album’s first and leading single, “No Lookin’ Back”, was co-written by Kenny Loggins and was a commercial success, peaking at No. 4 on the Hot Mainstream Rock Tracks chart and #34 on Billboard Hot 100.

The album was re-released one year later in 1986. The re-released version changed around the track order and featured different album cover artwork, along with the inclusion of the hit single “Sweet Freedom” from the soundtrack of the Billy Crystal and Gregory Hines film Running Scared as well as a slightly shortened version of “Our Love”.

8 Lost In The Parade