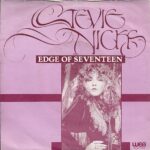 “Edge Of Seventeen” is a song by the American singer and songwriter Stevie Nicks from her debut solo studio album Bella Donna (1981), released as the third single from the album on February 4, 1982. The lyrics were written by Nicks to express the grief resulting from the death of her uncle Jonathan and the assassination of John Lennon during the same week of December 1980. The song features a distinctive, chugging 16th-note guitar riff, drum beat and a simple chord structure typical of Nicks’ songs. The song’s title for the single release was “Edge of Seventeen (Just Like the White Winged Dove)”. In the United States, “Edge of Seventeen” just missed out on the top 10 of the Billboard Hot 100, peaking at No. 11. Despite this, it became one of Nicks’ most enduring and recognizable songs and has been covered by several artists.