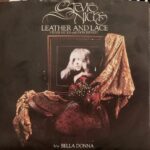 “Leather And Lace” is a song performed by American singers Stevie Nicks and Don Henley. It was released on October 6, 1981, as the second single from Nicks’ solo debut studio album Bella Donna (1981).

Nicks wrote the song for Waylon Jennings and Jessi Colter’s duet album Leather and Lace, but the song was not included on the album. Nicks’ version, a duet with Eagles singer Don Henley, peaked at number six on the US Billboard Hot 100 for three weeks in January 1982.