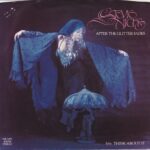 “After The Glitter Fades” is a 1981 song by the American singer/songwriter Stevie Nicks. It was the fourth and final single from her debut solo album, Bella Donna.