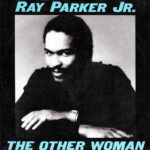 “The Other Woman” is the title track from the album The Other Woman by Ray Parker Jr. It was his first solo hit single without his longtime group, Raydio. Released as a single in March 1982, it peaked at number four on the Billboard Hot 100, number two on the Hot Black Singles chart, number twenty-four on the dance chart, and number thirty-three on the Adult Contemporary chart. It also spent one week at number one in Australia.