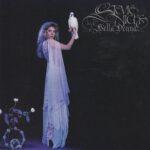 Bella Donna is the debut solo studio album by American singer and songwriter Stevie Nicks. Released on July 27, 1981, the album reached number one on the US Billboard 200 in September of that year. Bella Donna was awarded platinum status by the Recording Industry Association of America (RIAA) on October 7, 1981, less than three months after its release, and in 1990 was certified quadruple-platinum for four million copies shipped. Bella Donna spent nearly three years on the Billboard 200, from July 1981 to June 1984.

The album spawned four hit singles during 1981 and 1982: the Tom Petty and the Heartbreakers-penned duet “Stop Draggin’ My Heart Around” (#3), the Don Henley duet “Leather and Lace” (#6), her signature song “Edge of Seventeen” (#11) and country-tinged “After the Glitter Fades” (#32).

3 Stop Draggin’ My Heart Around

5 After The Glitter Fades

7 How Still My Love