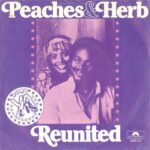 “Reunited” is a hit song for R&B vocal duo Peaches & Herb. As the second single release from their album, 2 Hot (1978), the song was a huge crossover smash, topping both the pop and soul charts. It spent four weeks at number one on both the R&B singles chart and the Billboard Hot 100 singles chart in 1979 and sold over two million copies. Billboard ranked it as the No. 5 song for 1979. In Canada, “Reunited” likewise reached number one and was the No. 9 song for the year.

The song was written by Dino Fekaris and Freddie Perren. It was the sequel to the duo’s 1968 hit “(We’ll Be) United”, performed with the original Peaches, which was itself a cover of The Intruders’ original 1966 hit.

2 Hot! is an album by American vocalist duo Peaches & Herb. The album was issued in 1978. It was the strongest performing album by the duo on the Billboard charts, where it topped the R&B Albums chart and reached the second position on the Pop Albums chart. 2 Hot notably featured the disco hit […]