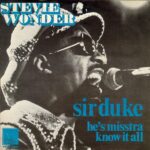 “Sir Duke” is a song composed and performed by Stevie Wonder, from his 1976 album Songs in the Key of Life. Released as a single in 1977, the track topped the U.S. Billboard Hot 100 and Black Singles charts  and reached number two in the UK Singles Chart, his joint biggest hit there at the time. Billboard ranked it as the No. 18 song of 1977. The song was written in tribute to Duke Ellington, the influential jazz legend who had died in 1974. The lyrics also refer to Count Basie, Glenn Miller, Louis Armstrong and Ella Fitzgerald.