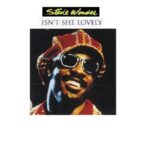 “Isn’t She Lovely” is a song by Stevie Wonder from his 1976 album, Songs in the Key of Life. The lyrics celebrate the birth of his daughter, Aisha Morris. Wonder collaborated on the song with Harlem songwriter and studio owner Burnetta “Bunny” Jones.

The song opens side 3 of Songs in the Key of Life, and starts with a baby’s first cry recorded during an actual childbirth. A recording of Wonder bathing Aisha as an older toddler is brought into the final section of the song, mixed with Wonder’s extended chromatic harmonica solo. All of the instruments heard in the song are played by Wonder, except for some keyboard parts played by Greg Phillinganes. During the recording process, bassist Nathan Watts laid down a bass guitar line to serve as a guide track for Wonder, but Wonder eventually replaced this with his own keyboard bass performance.

The more-than-six-minute song was not released as a single, as Wonder was unwilling to shorten the song to fit the 7″, 45 rpm format. With consumers demanding a single, Tamla compromised in late 1976, and a promotional version was given to radio stations. This edited version, 3:26 in length, received so much airplay that it reached number 23 on the Adult Contemporary chart in January 1977. Since then, the song has become a jazz and pop standard, covered by many artists.