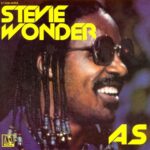 “As” is a song written and performed by Stevie Wonder from his 1976 album, Songs in the Key of Life. It reached number 36 on both the Billboard Hot 100 and Black Singles chart. The song gets its name from the first word of its lyrics.