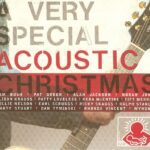 A Very Special Acoustic Christmas is the sixth in the A Very Special Christmas series of Christmas music-themed compilation albums produced to benefit the Special Olympics. The album was released in 2003 by Lost Highway Records. As opposed to earlier editions that contained a wide variety of musical styles, this edition of A Very Special Christmas featured primarily country and bluegrass artists. It also uses cover art unique to the series, minimizing the Keith Haring artwork that serves as the series trademark. It peaked at #159 on December 2003 Billboard album chart.

4 Just Put A Ribbon In Your Hair

5 Only You Can Bring Me Cheer (Gentleman’s Lady)

6 Even Santa Claus Gets The Blues

15 I’ll Be Home For Christmas