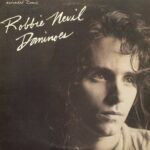 “Dominoes” is a song by American singer Robbie Nevil from his self-titled debut album in 1986.

Written by Nevil with Bobby Hart and Dick Eastman, Nevil recorded the song for his eponymous debut album, and it was released as the second single. The song reached #14 on the U.S. singles chart and #26 on the Canadian singles chart MTV featured a portion of the refrain with reworked lyrics to promote their new show at that time: Friday Night Party Zone.