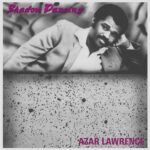 Shadow Dancing is an album by Azar Lawrence, released in 1986.

1 Magic In The Night

5 Your Love Is Keeping Me Alive