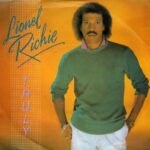 “Truly” is the debut solo single by singer-songwriter Lionel Richie. Resuming where he left off with D-flat major tunes “Sail On” and particularly “Still” when he was lead for the Commodores, Richie wrote the song and co-produced it with James Anthony Carmichael.

Released as the first single from his self-titled debut album in 1982, “Truly” debuted on the Billboard Hot 100 on 9 October 1982 and climbed to No. 1 on 27 November – 4 December 1982. It also spent four weeks at No. 1 on the adult contemporary chart, and logged nine weeks at No. 2 on the R&B chart, behind Marvin Gaye’s “Sexual Healing”. In addition, “Truly” made the top 10 in United Kingdom, where the song peaked at No. 6. The song won a Grammy Award for Richie in the category Best Male Pop Vocal Performance.