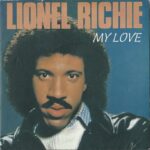 “My Love” is the title of a 1983 hit song by the American singer-songwriter Lionel Richie. It was the third single released off Richie’s self-titled debut solo album. The song features harmony backing vocals by country music singer Kenny Rogers.[1] It reached the Top 10 on three notable Billboard magazine charts in the spring of 1983: on the pop chart, the song peaked at # 5; on the adult contemporary chart, the song spent four weeks at # 1; and on the R&B chart, the song topped out at # 6. “My Love” was not among Richie’s more successful singles in the United Kingdom, where it only managed # 70 on the UK Singles Chart. In Canada in peaked on the RPM Singles chart at #28.

Later, a remake of the song was recorded and included on Richie’s 2012 album Tuskegee. The remake features Kenny Chesney.