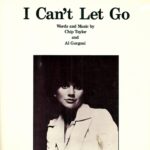 “I Can’t Let Go” is a song co-written by Al Gorgoni and Chip Taylor, who also wrote “Wild Thing”. “I Can’t Let Go” was originally recorded by blue-eyed soul singer Evie Sands’ on George Goldner’s Blue Cat label, which was popular in New York City in 1965.

Linda Ronstadt released the most successful American version in 1980 from her platinum-certified album, Mad Love. Released as the disc’s third single, it was produced by Peter Asher and was issued on Asylum Records. Ronstadt’s cover of “I Can’t Let Go” reached number 27 on the Cash Box Top 100 and number 31 on the Billboard Hot 100 chart in the summer of 1980.