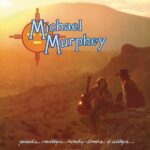 Peaks, Valleys, Honky Tonks & Alleys is the eighth album by American singer-songwriter Michael Martin Murphey and his first live album. The first five tracks were recorded at the legendary Palomino Club in North Hollywood, Los Angeles, an important West Coast country music venue. The remaining five tracks are studio recordings. The live tracks showcase Murphey’s early work with some interesting twists. His “Cosmic Cowboy” turns into a breakdown, while “Another Cheap Western” is coupled with The Olympics’ 1958 hit, “Western Movies”. The album produced the singles “Backslider’s Wine” and “Chain Gang” that peaked at numbers 92 and 93 on the Billboard Hot Country Singles chart respectively.

It was the final album in which he was credited as “Michael Murphey”—all of his subsequent releases have been under his full name.