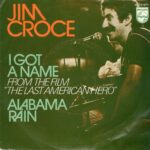 “I Got A Name” is a 1973 single recorded by Jim Croce with lyrics by Norman Gimbel and music by Charles Fox. It was the first single from his album of the same title and also Croce’s first posthumous single, released the day after his death in a plane crash on September 20. The song reached a peak of #10 on the Billboard Hot 100 after spending 17 weeks on the chart. It also hit #3 on the Cash Box Top 100.

“I Got a Name” was also the theme song for the 1973 movie The Last American Hero. It was also featured in the movies The Ice Storm, Invincible, Django Unchained, Logan and The Lego Ninjago Movie.

I Got A Name is the fifth and final studio album and first posthumous release by American singer-songwriter, Jim Croce. released on December 1, 1973. It features the ballad “I’ll Have to Say I Love You in a Song”, which reached number 9 in the US singles chart, and the ballad “Salon and Saloon”, the […]