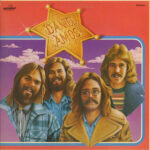 Daniel Amos is the self-titled debut album by Christian rock band Daniel Amos. The album was issued in 1976 by Maranatha! Music and was produced by Al Perkins. It is typical of the country rock sound the band performed in the mid-1970s before their switch to alternative rock in the early 1980s.

Heavily influenced by the Band, Steely Dan and the Byrds’ Sweetheart of the Rodeo, Daniel Amos’ debut full-length album temporarily leaves behind the rock roots of the band members earlier bands although many of the songs came from those days. Baxter’s “The Bible” and “Love in a Yielded Heart” (then known as “Freedom”) were both performed in the early days of Jubal’s Last Band, the band that was formed in late 1972 and eventually evolved into Daniel Amos. Taylor’s “William”, “Dusty Road,” and “Ain’t Gonna Fight It” date back to 1971 and his early band Good Shephard, and “Skeptic’s Song” (then known as “Resurrection”) dates back at least to 1972 and his band, Judge Rainbow and the Prophetic Trumpets.

1 Jesus Is Jehovah To Me

6 Don’t Light Your Own Fire

8 Walking On The Water

11 Love In A Yielded Heart