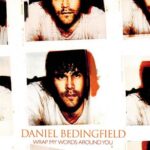 “Wrap My Words Around You” is the second single from British singer Daniel Bedingfield‘s second studio album, Second First Impression. It peaked at number 12 on the UK Singles Chart and number 30 on the Irish and Swiss charts.

Second First Impression is the second studio album released by British singer-songwriter Daniel Bedingfield. Released in 2004, it peaked at number eight on the UK Albums Chart. The album title comes from the chorus of track 7 on the album, “Show Me the Real You”, and also serves as a reference to this being Bedingfield’s […]