1999 Dallas Holm – Before Your Throne 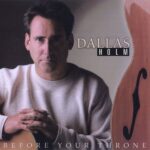 Before Your Throne is an album by singer/songwriter Dallas Holm, released in 1999 on Ministry Music.

Dallas Holm (born November 5, 1948) is a singer-songwriter of Christian music, whose musical ministry has spanned almost four decades. 1977’s “Live” album, along with the group Praise, featured “Rise Again”. The group consisted of Dallas Holm on acoustic guitar and vocals, Tim and Ladonna Johnson on keyboards and vocals, as well as Randy Adams on bass. Dallas Holm’s influence has been greatest in contemporary Christian music. While he has had several hit singles in CCM, he is best known for the favorite inspirational song “Rise Again” which is about the resurrection of Christ. Over the course of Holm’s tenure in gospel music he has performed many styles of music including adult contemporary, country, blues, reggae and pop/rock.