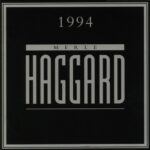 1994 is the forty-eighth studio album by American country singer Merle Haggard, released in 1994.

Although Haggard’s profile remained high in 1994, having been the subject of two tribute albums (Mama’s Hungry Eyes: A Tribute to Merle Haggard and Tulare Dust), 1994 was a commercial disappointment, peaking at number 60 on the Billboard country albums chart. It had been four years since Haggard’s previous album Blue Jungle, and in his Haggard biography The Running Kind, David Cantwell writes that Haggard, “took to bitching in interviews that Curb was happy enough to use his name for bait, luring future stars like Tim McGraw to the label, but it wouldn’t release his music.” The album includes a remake of his 1977 hit “Ramblin’ Fever.”