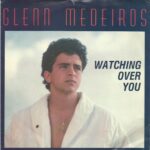 “Watching Over You” is the second single by Glenn Medeiros taken from his self titled debut album. It was released in June 1987 and peaked at 80 in the US Billboard Charts.

Glenn Medeiros is the self-titled debut album by American singer Glenn Medeiros, released in 1987. The album includes his cover version of George Benson’s “Nothing’s Gonna Change My Love for You”, which was a massive worldwide hit, reaching #12 on the Billboard Hot 100 and spent four weeks at number one on the UK Singles […]