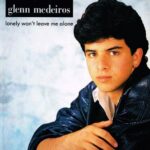 “Lonely Won’t Leave Me Alone” is a song co-written by Jermaine Jackson, David Foster, Tom Keane, and Kathy Wakefield. It was recorded by Jackson in 1986, and later by Glenn Medeiros in 1987. It was the second single released from his self-titled debut album. It reached number 67 on the Billboard Hot 100 on January 30, 1988.

Glenn Medeiros is the self-titled debut album by American singer Glenn Medeiros, released in 1987. The album includes his cover version of George Benson’s “Nothing’s Gonna Change My Love for You”, which was a massive worldwide hit, reaching #12 on the Billboard Hot 100 and spent four weeks at number one on the UK Singles […]