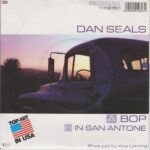 “Bop” is a song written by Paul Davis and Jennifer Kimball and recorded by American country music artist Dan Seals. It was released in October 1985 as the second single from his fifth studio album, Won’t Be Blue Anymore. It reached number one on the US Billboard Hot Country Singles chart in early 1986, becoming his second number-one hit on that chart and his first as a solo artist. It was a major crossover hit as well, peaking at number 42 on the Billboard Hot 100 and at number 10 on the Adult Contemporary chart. In Canada, it topped the RPM Top Singles and Country Singles charts.

Won’t Be Blue Anymore is the fifth studio album by country music artist Dan Seals. It was his most successful studio album; the only one to reach No. 1 on the Top Country Albums chart. The album featured some of Seals most popular songs, including “Bop” and “Meet Me in Montana”, a duet with Marie […]