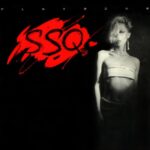 Playback is the first studio album by the American synthpop band SSQ, released in 1983 by Enigma and EMI America Records. It was the only album released by the band as SSQ until the release of their second album Jet Town Je t’aime in 2020, though the band members later worked on lead singer Stacey Q’s debut album Better Than Heaven (1986) and follow-up album, Hard Machine (1988).

The album was re-released on July 10, 2014, by F1 Music as a digital download on the iTunes Store and Amazon. It has never been issued on a legitimate compact disc by any company. It was originally issued on vinyl and cassette only