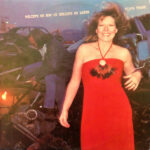 Believe Me Now Or Believe Me Later is the eleventh album by Diana Trask, released in 1976 on ABC.

Diana Roselyn Trask (born 23 June 1940) is an Australian-born country and pop singer. In the early 1960s she was a regular pop music performer on United States TV shows, Don McNeill’s Breakfast Club and Sing Along with Mitch. From 1968 to 1981 she was a country music singer in the US and in Australia. In the US, she had eighteen singles on the Billboard Hot Country Songs chart, where her top 20 hits are “Say When” and “It’s a Man’s World (If You Have a Man Like Mine)” (both 1973), “When I Get My Hands on You” and “Lean It All on Me” (both 1974).