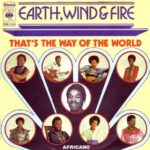 That’s The Way Of The World is the sixth studio album by American band Earth, Wind & Fire, released on March 15, 1975 by Columbia Records. It was also the soundtrack for a 1975 motion picture of the same name. The album rose to No. 1 on both the Billboard 200 and Top Soul Albums […]